Art Shibayama and his brothers Kenichi and Takeshi petitioned the InterAmerican Commission on Human Rights to take up their case.

They were taken from Peru during World War II and interned in the United States.

They weren't eligible for redress payments from the federal government because they weren't U.S. citizens when they were taken from Peru and lost everything.

Shibayama joined the class-action suit that resulted in a settlement of $5,000 and an apology letter. But Shibayama filed a case of his own later.

Legislation to provide redress payments has failed in Congress.

The commission is an agency of the Organization of American States.

Benefit for Campaign for Justice

Uncle Shiba's story, "Hidden Internment," was shown in the Loyola University Asian American Film Festival, 7 p.m. Saturday, May 4, at the Crown Center Auditorium (Loyola Avenue, by the lake). "Hidden Internment" was one of several films/videos screened and Irum, Casey and Art spoke following the complete program.

The following day the Chicago Japanese American Historical society in
conjunction with Japanese American Service Committeee co-sponsored a showing of "Hidden Internment" at Heiwa Terrace (a separate venue from the JASC) on May 5.

The woman judge (in Shiba's hearing) was very sympathetic to Shiba's case. She had previously ruled on a JA case in favor of the plaintiff.  She wants to make sure that all of the different parts of Shiba's case can be ruled under her jurisdiction. He sounded encouraged.

Yesterday afternoon we attended a benefit given by Toru Saito, the "Japanese Bing Crosby". It was advertised as a benefit for the Campaign for Justice and held at a church in Berkeley. He offered his services for free, we just had to find a location.

Yesterday morning it was pouring rain and we thought that there would not be very many people attending. We dreaded driving in that rain, but by 1 p.m. the sun came out and it had stopped raining. About 100 people attended. Admission was charged and they held a raffle. Thank you, Pam, for donating your CDs. Not only did Toru sing but he brought along a combo. They were all dressed in tuxedos, very dignified.

The music was wonderful. Mostly from the 40s and he is a better singer than Bing Crosby ever was, in my estimation. He did impressions of Vaughn Monroe, Billy Eckstine and Bing Crosby, too. I wanted to get up and dance the cha cha, swing, etc., the music was so inviting, but no one else wanted to even though Toru encouraged us to. Toru's family and relatives and we (Peruvians) brought refreshments for a brief reception afterwards. (His 95 year old mother attended, too. He married into a family of singers. The Masuda family. JAs who were interned in Crystal City. One of the daughters, Lury Yonago, was a customer of ours and she knew some of the Peruvians from Crystal City. She and her family were always supportive of the Peruvians.)

We went up to Toru to thank him and to introduce ourselves and he was so happy to meet Shiba. He said that he wanted to do the benefit for him, alone, because he had read and heard about his fight for redress and justice. The reason he gave us was so touching.

In his younger day, (retired now) he had worked for the Juvenile Corrections Dept. During that time, he reported 3 people of abusing juveniles, including his supervisor. Well, you can imagine how that turned out. Just like Bob Bratt in the DOJ except Toru had no one to defend him and he was fired. He was very discouraged and felt betrayed and felt so alone fighting to defend himself. He could relate to Shiba fighting for justice, alone, against the govt. So he said to himself that "I am going to help this guy." He wanted to advertise it for a benefit for Shiba but was encouraged to include all the Peruvians so it was that it became a benefit for the CFJ. (He said that he had heard reports of a Nisei, who had received his $20,000. redress, say, "Why should I help Art or the Peruvians?" This made him want to help Shiba even more.)

We are so encouraged when there are so many people out there who are supportive of Shiba's efforts and act on it. That really keeps us going.

Another group of World War II victims also remains uncompensated -- the situation of Latin American Japanese. From 1942 - 1945 the United States seized 2,264 men women and children of Japanese ancestry from 12 countries in Latin America of which 80 percent were Peruvian. They were shipped to detention centers in Panama and in several states of the United States.

The forced abduction, internment, treatment and exchanges of these persons constituted gross violations of humanitarian law at that time. The surviving Latin American Japanese were excluded in the program carried out by the United States to compensate American Japanese for their internment in camps and other related damages, and therefore suffer discrimination. We have documents provided by the Japanese Peruvian Oral History Project that fully describe these events. The Project seeks the support the Sub-Commission and interested non-governmental organizations. 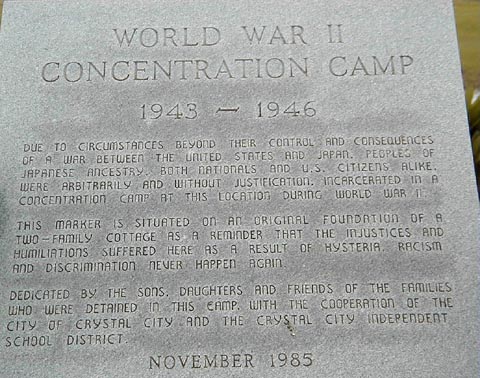 I was born in Lima Peru. My parents owned a business importing textiles and making dress shirts to sell to retail stores. My maternal grandparents owned a department store and were among the first to be arrested and used in a hostage exchange.

The police came to our house looking for my father several times. The final time, again not finding him, they arrested my mother and put her in jail for two days. My sister, who was 11, went with her because she did not want our mother to go alone. When my father learned of this, he immediately came out of hiding and my mother and sister were released.

Our family was brought to the US on the US Army transport Cuba, guarded by American military personnel, who were armed with rifles, machine guns and whips. As we boarded the ship, we were searched. On orders of the US government, all passports and visas were confiscated.

Families were separated on the ship. The women and children were put into small cabins.

I was only 13, but was put below deck with the men. We were only allowed to go on deck twice a day for ten minutes and were never allowed to see our families. We had to endure these overcrowded conditions for 21 days. From Callao to New Orleans, the ship was guarded by US destroyers and submarines.

In New Orleans, the women and children were led off the ship first. They were marched straight to a warehouse, where they were forced to strip and stand in line naked. Then they were sprayed with insecticide. My sister, who was 11, said she could never forget how humiliated she felt, having been forced to strip in front of boys and felt sorry for the mothers, who were very modest. The men, then went through the same process. After we all showered, we boarded a train.

During the train ride to Crystal City, Texas, we were ordered to keep the shades down the entire two days. My sister thought we were all going to be killed at the end of the train ride.

We were kept in an internment camp in Crystal City for 2 1/2 years. My father had us attend Japanese school in the internment camp. He thought it would be more useful when we returned to Peru because English was rarely spoken there.

In the summer of 1946, there were reports that the internment camp was going to be closed and that we would be deported because we were considered illegal aliens. Our family wanted to return to Peru, but the Peruvian government would not allow us to return. So we were paroled to Seabrook Farms in New Jersey.

My formal education ended when I was 16 because my mother was pregnant and my father could not support our family of 8 working alone. We were paid about 70 cents an hour, straight time, and were deducted 30% income tax because we were considered illegal aliens.

I worked in the bulb garden and green house for a year. When I turned 17, I received special permission to work at the packing plant where minors were not allowed to work. During the peak season, we worked 12 hours a day, 7 days a week, rotating from day to night shift every 2 weeks. Communication with the other employees was difficult because we did not speak English.

In March, 1949 after 2 1/2 years in Seabrook, having given up all hope of returning to Peru, my father decided to move us to Chicago. We began fighting deportation and applied for permanent residency.

In 1952, during the Korean War, while living in Chicago classified as an illegal alien and fighting deportation, I received a draft notice from the US Army. While serving in the European Command, the officer in charge of my section tried to get me my citizenship, but I was denied. The papers said that I did not have a legal entry to the US and should report to the INS in Chicago on my discharge from the service.

The INS in Chicago advised me that I could only become a permanent resident by legally re-entering the US through Canada. I was sent to Canada by the INS in 1956 to get my legal entry. My permanent residency was granted on June 11, 1956. I finally became a naturalized citizen in 1970.

When the Civil Liberties Act of 1988 was passed, I thought I was eligible for redress so I filed my application. I was declared ineligible for redress because I was classified as an "illegal alien" rather than a permanent resident when I had been interned. How could I be an "illegal alien"? I was brought here by force by the US government and interned in a Department of Justice camp which was administered by the INS.

My family and I and other Japanese Latin Americans have been trying for almost 20 years to have the US government acknowledge its wrongdoing and at least give us the same respect and redress that Japanese American have gotten. We've gone through all the channels. I took my denial of redress through the appeals process several times; I went to Washington, DC four times to talk to government officials in the last 7 years; I've written letters to the President and my Congressional representatives.

We had no choice but to sue the US government with the Mochizuki class action lawsuit. But I could not accept the settlement offer because it felt like a slap in the face. The letter of apology doesn't say anything about Japanese Latin Americans or specify wrongs which were committed, like forced deportation. And we weren't being offered equal justice with Japanese Americans. We were being thrown a bone so that we would just go away.

But we won't go away. And we won't let the US government get away with causing the suffering we had to go through during and after the war and the discrimination we are still having to endure.

I have been involved in this issue since the early '80s and it has changed me. Being forced to speak out has changed me. I am more outgoing now. I speak up more. I used to stay in the background and hated to speak out. But now I'm willing to tell my own story. Sometimes, it feels like a burdensome task, but someone needs to do it. I feel forced to do it, because it is important that the government know it cannot do as it pleases.

This is important not only for me and the other internees, but it's important for all our kids. We have to let the public know what happened. The government has to admit that what it did was wrong so it won't happen again. I hope that what people learn from our struggle is the value of fighting for what is right.